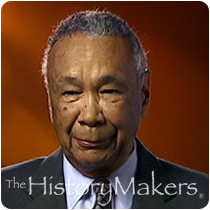 See how Robert Johnson is related to other HistoryMakers
Donate Now

Robert "Bob" Johnson, born June 17, 1935, in Chicago, was the older of two children born to Gladys and Robert. Johnson attended Roosevelt University in Chicago, earning a B.S. in sociology in 1958.

Following graduation, Johnson went on to work at the Chicago Housing Authority as a community relations aide. In 1965, he was hired at Sears Roebuck & Company, and rose to the position of vice president of specialty sales. In 1988, Johnson and his daughter partnered to form Bagcraft Corporation of America, a flexible packaging manufacturer, created as part of an initiative by PepsiCo and Frito-Lay to encourage the creation of minority-owned businesses suppliers. In 1991, Johnson and business partner Tom Bryce formed Johnson Bryce, Inc., as part of that same PepsiCo initiative. Johnson currently serves as CEO and chairman of the company. In 1997, with revenues exceeding $25 million, Johnson Bryce, Inc., was named the Frito-Lay Flexible Packaging Supplier of the Year.

Johnson is also active with several organizations and universities. He is a trustee of LeMoyne Owen College and a member of the board of trustees of Clemson University's Packaging Science Department. He is a founding member of the Executive Leadership Council, a nonprofit corporation that provides a networking and leadership forum for African American executives. Johnson also serves on the board of the Federal Reserve Bank of St. Louis.

Johnson and his wife, Rose, live near Chicago and have two daughters.

See how Robert Johnson is related to other HistoryMakers
Donate Now
Click Here To Explore The Archive Today!