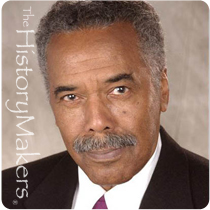 See how Robert Hooks is related to other HistoryMakers
Donate Now

Distinguished actor Robert Hooks was born Bobby Dean Hooks on April 18, 1937, in Washington, D.C. He was the youngest of five children. Hooks’ father died while working on a railroad track. His mother supported the family by working as a seamstress. Hooks attended Stevens Elementary School. He performed in his first play, The Pirates of Penzance, at the age of nine. After graduating from Francis Junior High School, Hooks attended Armstrong High School in Washington, D.C. His mother remarried and moved the family to Philadelphia, Pennsylvania, where Hooks attended his first integrated school at West Philadelphia High School. Hooks soon joined the drama club and began acting in plays by such authors as William Shakespeare and Samuel Beckett.

Hooks moved to New York City in 1959 to become an actor. That year, he debuted as Bobby Dean Hooks in a touring production of Raisin in the Sun. He made his Broadway debut in 1960 in Tiger, Tiger, Burning Bright, and became well known for his role as Clay in LeRoi Jones/Amiri Baraka's Dutchman in 1964. With this play, Hooks became known as Robert Hooks. Also in 1964, Hooks formed the Group Theater Workshop, offering training in the arts to underprivileged youth. In 1967, Hooks founded The Negro Ensemble Company with Douglas Turner Ward and Gerald Krone. This important theater company has gone on to produce plays by Peter Weiss, Derek Walcott, Wole Soyinka, and many other playwrights.

His television career began in 1963 with the role of a police detective on the television series East Side/West Side. Hooks’ television career spans over forty years. Some of his other television series credits include The White Shadow, Trapper John M.D., WKRP in Cincinnati, Sister Sister, M.A.N.T.I.S., The Fresh Prince of Bel-Air, Family Matters, A Different World, Clueless, Diagnosis Murder, and Seinfeld. Hooks starred in several made-for-TV movies throughout the 1970s, 1980s, and 1990s. His television movie credits include Carter's Army (1970), Two for the Money (1972), A Woman Called Moses (1978), Madame X (1981), Words by Heart (1985), Appearances (1990), and Abandoned and Deceived (1995).

See how Robert Hooks is related to other HistoryMakers
Donate Now
Click Here To Explore The Archive Today!