Information about Robert A. Harris 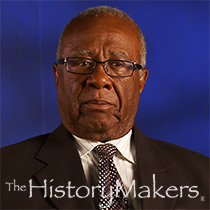 Favorite Color:
Blue
Favorite Food:
Seafood
Favorite Time of Year:
Fall
Favorite Vacation Spot:
United Kingdom
Favorite Quote:
It's Better to Have It and Not Need It Than to Need It and Not Have It.

Favorite Color:
Blue
Favorite Food:
Seafood
Favorite Time of Year:
Fall
Favorite Vacation Spot:
United Kingdom
Favorite Quote:
It's Better to Have It and Not Need It Than to Need It and Not Have It.

See how Robert A. Harris is related to other HistoryMakers
Donate Now

Music professor and conductor Robert A. Harris was born on January 9, 1938 in Detroit, Michigan. His father, Major Harris, was a factory worker; his mother, Rusha Harris, a homemaker. Harris attended Sherrill Elementary and graduated from Charles Chadsey High School in 1956. He studied at Wayne State University where he earned his B.A. degree in music education in 1960 and his M.A. degree in music on 1962. Harris briefly attended the Eastman School of Music in Rochester, New York and then received his Ph.D. degree in composition and theory from Michigan State University in 1971. He also completed post-doctoral work at Aspen Music School in 1973 and 1974.

In 1960, Harris was hired as a music teacher in the Detroit Public Schools. He was then appointed as an assistant professor of music at Wayne State University. Harris became Director of Choral Activities at Michigan State University in 1964, and then joined the faculty of Northwestern University’s Bienen School of Music as professor of conducting and director of choral organizations in 1977. He has also served as a visiting professor at Wayne State University, the University of Texas, and the University of South Africa in Pretoria. In 2012, Harris retired as professor emeritus at Northwestern University. Harris has appeared as a conductor, choral clinician and adjudicator throughout the United States and in the Republic of China where he served as one of two guest conductors/clinicians for the Taipei Philharmonic Choral and Conducting Workshop. His international performances also include South Korea as the guest conductor for the Inchon City Chorale, and Hong Kong as a guest conductor of a Choral Festival Youth Chorale. As an international music instructor, Harris has presented master classes, workshops, and lectures on conducting in South Africa, as well as presenting lectures and master classes on African American spirituals in Argentina.

Harris served as a member and co-chair of the Choral Panel of the National Endowment for the Arts. Harris is associated with a number of professional and honorary organizations, including the American Choral Directors Association, the American Society of Composers and Publishers (ASCAP), Chorus America, Pi Kappa Lambda National Honor Music Society and Phi Mu Alpha Professional Music Fraternity.

Harris has received several awards and honors, including the Wayne State University “Alumni Arts Achievement Award in Music,” the Northwestern University School of Music “Faculty Exemplar Teaching Award,” and the Northwestern University Alumni Association “Excellence in Teaching Award.” As a composer, Harris has been the recipient of over forty commissions from various schools, churches and musical organizations. His compositions, especially those of the choral genre, have been performed throughout the United States, Europe and South Africa. A number of his compositions have been published.

Robert A. Harris was interviewed by The HistoryMakers on August 25, 2013.

See how Robert A. Harris is related to other HistoryMakers
Donate Now
Click Here To Explore The Archive Today!