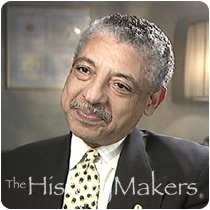 Favorite Color:
Red
Favorite Food:
Potato Chips
Favorite Time of Year:
Summer
Favorite Vacation Spot:
Sydney, Australia
Favorite Quote:
I Can't Do Everything, But I Can Do Something.

Favorite Color:
Red
Favorite Food:
Potato Chips
Favorite Time of Year:
Summer
Favorite Vacation Spot:
Sydney, Australia
Favorite Quote:
I Can't Do Everything, But I Can Do Something.

See how Robert Goodwin is related to other HistoryMakers

Robert Kerr Goodwin was born on November 15, 1948, in Tulsa, Oklahoma; his mother was a teacher and social worker, and his father was a business owner and attorney. At the age of fifteen, Goodwin became a licensed preacher and planned to pursue a career in the ministry; in 1966 he earned his high school diploma from Bishop Kelley Catholic School where he worked on the school paper, was a member of the student government, year book, and chess clubs, and was the first black student body president.

Upon completing his master’s degree, Goodwin was summoned back to Tulsa by his father to run the family-owned newspaper, The Oklahoma Eagle. Goodwin operated the paper until 1981; during his tenure he increased the readership and converted the printing to a more efficient, cost effective process. Between 1981 and 1985, Goodwin sold encyclopedias in Texas, accumulating a million dollars in sales in a five-year period. From 1985 until 1989, Goodwin worked as a printing consultant, lobbyist, director of public affairs, and associate vice president for university relations at Prairie View and Texas A&M Universities. While working at Texas A&M, Goodwin led the Democrats for Bush campaign. Goodwin's activities caught the attention of the Bush Administration and he was offered a position with the Department of Education working on the White House Initiative on Historically Black Colleges, a position he held from 1989 until 1992. In 1992, Goodwin was hired as the executive vice president of the Points of Light Foundation, an organization responsible for assisting and encouraging citizens to engage in volunteer service; he went on to serve as president and CEO of the organization. In 2007, Goodwin announced his retirement from the Points of Light Foundation, after over fifteen years of service.

For his civic and community achievements, Goodwin received numerous awards and honors.

Goodwin was interviewed by The HistoryMakers on August 26, 2004.

See how Robert Goodwin is related to other HistoryMakers
Click Here To Explore The Archive Today! 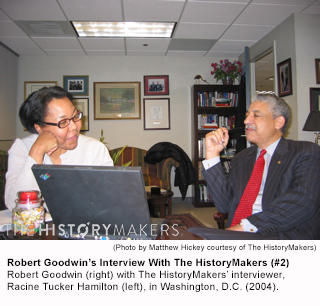