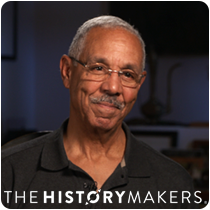 See how Robert Freeman is related to other HistoryMakers
Donate Now

Freeman began his career in 1971 as an art teacher at Brook School in Weston, Massachusetts. From 1973 to 1981, Freeman worked as the art director of Weston Public Schools. In 1981, he became the artist-in-residence and painting instructor at Noble and Greenough School in Dedham, Massachusetts. Freeman subsequently worked as a painting and drawing lecturer at Harvard University from 1986 to 1992. In 2007, he retired from Noble and Greenough School. Known for his trademarks, the use of color, gesture and nearly abstract figures, Freeman’s paintings depicted African American figures, and was heavily inspired by his childhood experiences in Ghana and Washington, D.C. In 2008, Freeman exhibited his Golden Light Paintings series at the Zenith Gallery in Washington, D.C. That same year, Freeman’s paintings were included in the Five American Voices exhibit among the works of Romare Bearden, Benny Andrews, Alma Woodsey Thomas, and Richard Yarde at the Meridian International Center in Washington, D.C. His series New Works, was showcased at Adelson Galleries in Boston, Massachusetts in 2016. In 2018, Freeman collaborated with photographer Max Stern to paint the Mardi Gras Indians series, which celebrated the 300th anniversary of the New Orleans Mardi Gras parades.

His artwork has been exhibited at Clark Gallery in Lincoln, Massachusetts, June Kelly Gallery in New York City, Lowe Art Museum at the University of Miami, and the Norman Parish Gallery in Washington, D.C. Freeman's paintings are also included in the public collections of Brown University, Boston College, Boston Public Library, the National Center of African American Artists, DeCordova Museum, and the Schomburg Center for Research in Black Culture, and are in the permanent collection of the Museum of Fine Arts in Boston, Massachusetts.

Freeman and his wife, Bettye, have three children.

Robert Freeman was interviewed by The HistoryMakers on November 13, 2018.

See how Robert Freeman is related to other HistoryMakers
Donate Now