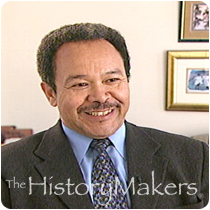 See how Robert Franklin is related to other HistoryMakers
Donate Now

Robert Michael Franklin, Jr., is the presidential distinguished professor of social ethics at the Candler School of Theology at Emory University, and former president of the Interdenominational Theological Center.

Franklin was born February 22, 1954 in Chicago, Illinois. He graduated from Morehouse College in 1975 with a double major in political science and religion before going on to study at the University of Durham in England to pursue international studies. After traveling to North Africa and the Soviet Union, he enrolled in the Harvard Divinity School and received the master of divinity degree in 1978. He earned his doctorate degree in 1985 from the University of Chicago where his major fields of study included social ethics, psychology and African American religion.

Over the years, Franklin has worked as a scholar-theologian, educator, former seminary program administrator and foundation executive. He has served on the faculties of divinity and theology schools for the University of Chicago, Harvard University, Colgate-Rochester and Emory Universities. Before his presidency at the Interdenominational Theological Center, he served as a program officer at the Ford Foundation, where he was responsible for grants to African American churches that were engaged in secular social service delivery and for advising the president of the Foundation about future funding for religion and public life.

Franklin has written two books, Liberating Visions: Human Fulfillment and Social Justice in African American Thought and Another Day’s Journey: Black Churches Confronting the American Crisis. He has also co-authored a book with Don Browning and others entitled From Culture Wars to Common Ground: Religion and the American Family Debate. Franklin is also the author of an internet study guide on the congregational use of the DreamWorks SKG film, The Prince of Egypt.

Sought after by the media, Franklin has provided guest commentary on religion for CNN and National Public Radio. He also serves on numerous boards of directors, including the Center on Philanthropy, the Joint Center for Political and Economic Studies, the Congress of National Black Churches, the Georgia Humanities Council and Religion and Ethics News Weekly. He is also a member of the advisory board of the American Assembly and the Children’s Defense Fund’s Black Church and Community Crusade. Franklin has worked with the White House on numerous projects related to religion, race, public health and community development. He is also a member of the professional fraternity Sigma Pi Phi.

Franklin has been married to obstetrician and gynecologist Dr. Cheryl Goffney Franklin since 1986. They have three children.

See how Robert Franklin is related to other HistoryMakers
Donate Now
Click Here To Explore The Archive Today!