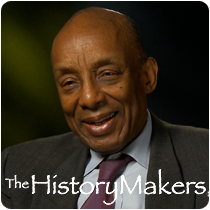 See how Robert Dottin is related to other HistoryMakers

Biologist and research director Robert Dottin was born in Trinidad in 1943. He graduated from St. Mary’s College in 1970 with his B.S. degree in in biology. Dottin went on to earn his M.S. degree in medical biophysics in 1972 and his Ph.D. in medical genetics in 1974 from the University of Toronto. Upon graduation, Dottin was awarded the Centennial Fellowship to pursue post-doctoral research at the Massachusetts Institute of Technology.

Dottin served as a professor at the Johns Hopkins University, and has been a visiting professor at the University of Copenhagen, Pasteur Institute in Paris, Karlova University in Prague and Oxford University. Dottin then became a full professor at Hunter College of the City University of New York. His teaching experience includes courses in bioinformatics, genetics and developmental biology, all of which utilize internet and digital technology to promote interactive learning. In addition, Dottin has developed many strategies that promote the inclusion of under-represented groups in STEM (science, technology, engineering, and mathemathics) research as well as addressing health disparities. Dottin is the founder of the “JustGarciaHill” website – a internet-based community of more than four-thousand minorities in science. Dottin scholarship is published in journals such as the Journal of Biological Chemistry and Ethnicity and Disease.

From 1988 to 1986, Dottin served as the program coordinator for the Center for the Study of Gene Structure and Function (Gene Center) at Hunter College. In 1998, he was appointed as the director of the Gene Center. As director, Dottin increased the productivity, the level of funding, and the diversity of the faculty and staff within the organization. He steered the research at the Gene Center towards a “translational research” agenda and managed equal partnership of the Gene Center in the Clinical and Translational Science Center (CTSC) with the Weill Cornell Medical Center, the Memorial Sloan-Kettering Cancer Center, and the Hospital for Special Surgery. He is the principal investigator for the CTSC sub-award to Hunter College, and he is co-principal investigator on T3 Translational Research Network pilot projects to use an interactive videoconferencing platform to prevent chronic diseases, infectious diseases, and environmental toxicity.

Robert Dottin was interviewed by The HistoryMakers on March 28, 2013.

See how Robert Dottin is related to other HistoryMakers
Click Here To Explore The Archive Today!