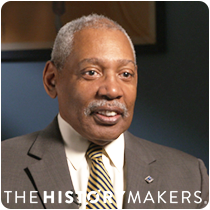 Healthcare executive Robert Currie was born on June 12, 1951 in Orange, New Jersey to James Currie and Hazel Shelton. Currie graduated from Orange High School in 1970, and earned his B.A. degree in sociology and urban studies from Lawrence University in Appleton, Wisconsin in 1974. Currie went on to receive his M.A. degree in urban planning and policy from the University of Illinois at Chicago in 1978.

In 2009, Currie was named as one of the Chicago Defender’s “50 Men of Excellence.” Currie received an Excellence in Health Care Award from the Illinois Black Caucus and the National Association of Health Services Executives (NAHSE) President’s Award, both in 2010. Currie also received a Chapter Leadership Award from the NAHSE Chicago Chapter in 2011. Currie served on the board of numerous organizations including the Black United Fund of Illinois, the Institute for Diversity in Healthcare Management, and Youth, Vision, & Integrity, Inc. He also served as the president of NAHSE’s Chicago chapter from 1989 to 1991, and the national president of NAHSE from 1999 to 2001.

Robert Currie was interviewed by The HistoryMakers on February 23, 2018.