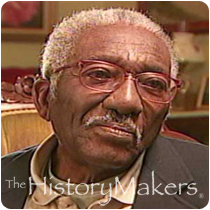 Robert Church was born in Athens, Georgia, on September 26, 1909. His father, Arthur Church, worked as a sharecropper and an overseer on a corporate lawyer’s farm. Church also worked in agriculture, improving the quality of life for poor African American farmers.

Church walked five miles each way to a segregated elementary school. In 1927, he enrolled at the Hampton Institute in Hampton, Virginia, for both high school and college. Working his way through school, he cleaned rooms at the Hampton guest house, Holly Tree Inn, cleaning some of the same rooms Booker T. Washington had before him. Church also worked at a summer camp in New Hampshire, and during the school year, he milked cows and fed hogs. He earned a B.S. degree in agricultural education in 1934.

Church returned to Georgia and began work as a high school vocational agriculture teacher in Wilkes County. He became the assistant principal, and in 1937, this work took him to Jenkins County to serve as a school principal. Through the school, he became associated with the University of Georgia Agriculture Extension. This led him to become Peach County’s first black county agriculture agent. In this capacity, he taught African American farmers and their families the latest agricultural techniques in order to increase production, improving their living standards. He also played a leading role with 4-H and conducted the Fort Valley Ham and Egg Show from 1949 to 1966. In 1958, Church earned an M.S. degree in agricultural education from the Tuskegee Institute.

After retiring from active professional work in 1969, Church spent the equivalent of another career in public service. He served two terms on the Fort Valley City Council, from 1974 to 1982. For twenty-five years, he served as a board member for the Department of Family and Children Services at both the local and state levels. He was also affiliated with Trinity Baptist Church, Peach County United Way and Omega Psi Phi Fraternity.