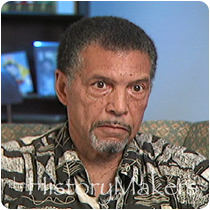 See how Robert C. Hayden is related to other HistoryMakers
Donate Now

Robert C. Hayden, Jr. is a historian, author, and educator, who has contributed to African American historiography for thirty-five years. He is the author, co-author, and editor of nineteen books and special publications in the field. Alongside his historical research, writing and teaching, he served for thirty-two years in numerous educational positions – as an ethnic studies curriculum developer and as a project administrator in urban school projects across the country. He is the founder and president of RCH Associates that provides African American history services and resources to educators and a range of public and private institutions, organizations and community groups.

Born in New Bedford, Massachusetts on August 21, 1937, Hayden graduated from New Bedford High School in 1955. He attended Boston University, receiving his B.A. degree in 1959 and his master’s degree in 1961. He completed two post-graduate fellowships --one at Harvard University’s Graduate School of Education and another in the Department of Urban Studies and Planning at the Massachusetts Institute of Technology (MIT) between 1976 and 1977. Between 1994 and 1995, he was a Scholar-in-Residence at the Schomburg Center for Research in Black Culture in New York City.

Between 1961 and 1965, Hayden worked as a middle school teacher. In 1966, Hayden became an editor with Xerox Education Division, serving in that capacity for three years. From 1970 to 1973, he was the executive director of the Metropolitan Council for Educational Opportunity in Boston. In 1974, he moved to the Education Development Center in Newton, Massachusetts where he directed ethnic heritage studies projects for urban school districts. In 1980, he became the director of MIT’s Secondary Technical Education Project. From 1982 to 1987, he served as an assistant superintendent in the Boston Public School System. Before retiring in 1992, Hayden served for five years as the executive director of the Massachusetts Pre-engineering Program.

Hayden is known for his three pioneering works in the 1970s on the history of African Americans in science, technology and medicine. From 1974 to 1983, he wrote a weekly column, “Boston’s Black History”, for the Bay State Banner newspaper in Boston. He was a contributing writer for the Dictionary of American Negro Biography (1982) the Encyclopedia of African-American Culture and History (1995), and American National Biography (1999).

Hayden has been a Lecturer in the College of Public and Community Service at the University of Massachusetts at Boston since 1992. From 1978 to 2001, he was a Senior Lecturer at Northeastern University and held the same position at Lesley University from 1992 to 2005.

Residing on the Island of Martha’s Vineyard, Massachusetts, he served on the Oak Bluffs Historical Commission from 1998 to 2000. He is the national secretary of the Association for the Study of African American Life and History (ASALH) and the founding president of the Martha’s Vineyard Brach of the ASALH.

See how Robert C. Hayden is related to other HistoryMakers
Donate Now
Click Here To Explore The Archive Today!