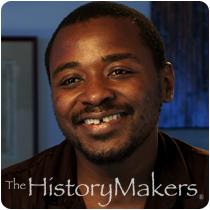 See how Robert Battle is related to other HistoryMakers

Dancer and choreographer Robert Louis Battle was born on August 28, 1972 in Jacksonville, Florida to Marie Battle. Three weeks after his birth, Battle was adopted by his great-uncle Willie Horne. He was raised by Horne and his daughter Dessie Horne. Battle started dancing in high school and graduated from the New World School of Arts in Miami, Florida. He went on to attend The Julliard School, where he graduated in 1994. Battle joined Parsons Dance Company where he performed and choreographed for the next seven years. During this time, Battle also choreographed his first piece for an Alvin Ailey Foundation dance company; the piece was entitled Mood Indigo and was performed by the Ailey II Company in 1999.

Battle was named as one of the Masters of African American Choreography by the John F. Kennedy Center for Performing Arts in 2005, and has received numerous other awards for professional excellence. He has performed or choreographed for venues such as the Joyce Theater, the American Dance Festival, the Dance Theater Workshop, and the Jacob’s Pillow Dance Festival.

Robert Battle was interviewed by The HistoryMakers on August 27, 2010.

See how Robert Battle is related to other HistoryMakers
Click Here To Explore The Archive Today!