Information about Robert B. Hill 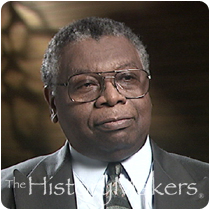 See how Robert B. Hill is related to other HistoryMakers

Robert Bernard Hill was born on September 7, 1938 in Brooklyn, New York. His mother worked as a domestic and his father was a cook. He attended New York City public schools. In 1956, Hill earned his high school diploma from Boys High School, where he was active in student government, the school paper, and the math and history clubs.

From 1956 until 1961, Hill attended City Colleges of New York, where he earned his B.A. degree in sociology. While attending City Colleges in 1960, he reactivated the campus Youth NAACP chapter and became its president. During his tenure, he befriended and invited civil rights activist Malcolm X to speak to students. Hill went on to earn his Ph.D. in sociology from Columbia University in 1969.

Hill became a social researcher for the National Urban League in 1969, and continued to work in that capacity until 1981. In 1972, he published his first book, The Strengths of Black Families to counter negative stereotypes of blacks in the 1965 report on the Negro family by Daniel Moynihan. While working for the Urban League, Hill taught sociology course at Fordham, New York University, Princeton, the University of Maryland, Howard University, and the University of Pennsylvania. From 1981 and 1986, Hill worked for the Bureau of Social Science Research. From there, he worked as a consultant at the White House for the Reagan Administration where he researched and documented self-help groups around the country. From 1989 until 1998, Hill worked as a Research Director at Morgan State University. In 1999, Hill published his latest book, The Strengths of African American Families: Twenty-Five Years Later. During that same year, Hill was offered a position with Westat, a research firm in Rockville, Maryland, where he remains today.

See how Robert B. Hill is related to other HistoryMakers
Click Here To Explore The Archive Today!