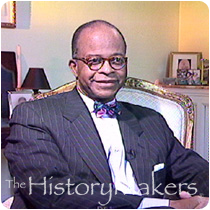 See how Riley K. Temple is related to other HistoryMakers

Prominent, Washington, D.C. attorney and activist Riley Temple was born July 9, 1949 in Richmond, Virginia. He grew up in the same neighborhood as Douglas Wilder, former Governor of Virginia. He attended George Mason elementary school and earned his high school diploma from Armstrong High School in 1967. Other noteworthy Armstrong graduates include, Max and Randall Robinson, Oliver Hill and Paul Freeman. While in high school Temple participated in the drama club, marching and orchestra band and graduated number two in his class.

In 1971, Temple earned his AB degree from Lafayette College in Pennsylvania where he was president of the predominately Jewish fraternity, Pi Lambda Pi. He graduated from Georgetown University Law School in 1974. Temple accepted the position of assistant general counsel at the Corporation for Public Broadcasting and served in that post from 1974-1977. He then went on to work as a legislative aide to Senator Charles Mathias, a Republican from Maryland. From 1978-1980 he was senior counsel to RCA Global Communications in New York. From 1980-1983 he went back to work on Capitol Hill as communications counsel to the Senate Committee on Commerce, Science and Transportation. Temple entered private practice in 1985.

Temple has been recognized for his community activism in raising awareness about HIV/AIDS. He is a supporter of the arts and has served as the president and vice president of Washington, D.C.'s Arena Stage. He also serves as board president for True Colors, a national black theatre company based in Atlanta, Georgia. He has also underwritten several of the True Colors productions, including Langston Hughes' Tambourines to Glory scheduled to open in September of 2004. Temple has also endowed Lafayette College's David and Helen Temple Scholarship, named in honor of his parents, for study abroad and visiting lecture series in Africana studies.

Temple is currently a partner at Halprin Temple, a telecommunications law firm in Washington, D.C.

See how Riley K. Temple is related to other HistoryMakers
Click Here To Explore The Archive Today!