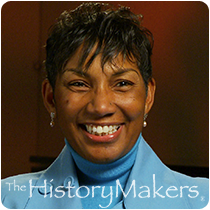 See how Ricki Fairley is related to other HistoryMakers

Marketing executive Ricki Fairley was born on June 17, 1956 in Washington, D.C. to Wilma Holmes and Richard Fairley. She graduated from Dartmouth College in 1978 with her B.A. degree in English. She went on to receive her M.B.A. degree from Northwestern University’s Kellogg School of Management in 1981.

Upon graduation, Fairley was hired as an associate brand manager for McNeil Consumer Products Company in Fort Washington, Pennsylvania. She then worked as an associate brand manager at Nabisco from 1984 to 1988, and as senior brand manager at Reckitt & Colman from 1989 until 1995. In 1995, Fairley was named vice president of marketing for the SEGA Channel, and from 1996 to 2000, she served as marketing director for The Coca-Cola Company. She then worked as vice president of marketing for Chupa Chups USA from 2000 to 2003, and as partner and strategist for PowerPact, LLC from 2003 to 2005. In 2005, Fairley was hired as partner and senior vice president of strategy and planning for IMAGES USA, and promoted to chief marketing officer and partner in 2009. In February of 2012, Fairley established DOVE Marketing Inc., where she serves as president.

Fairley is the president emeritus of the Black Alumni of Dartmouth Association, is a member of the Dartmouth Committee on Trustees, and serves as board chair of Kenny Leon's True Colors Theatre Company. Fairley has also served on the boards of the Latin American Association, Ne-Yo’s Compound Foundation, and Move This World. She manages the relationship between the Links, Inc. and the White House Office of Public Engagement as a member of the National Women’s Issues and Economic Empowerment Committee, and is a member of the Silver Spring, Maryland Chapter of the Links, Inc.

Fairley holds the Leadership Award from the Creative Thinking Association of America, was named a Top 100 Marketer by Black Enterprise magazine in February 2011, and is a member of the 2011 Class of Leadership Atlanta. She received the Association of National Advertisers (ANA) 2013 Multicultural Excellence Award for the African American radio advertising for the Obama for America campaign.

Fairley has two daughters, Amanda and Hayley; both are graduates of Dartmouth College.

Ricki Fairley was interviewed by The HistoryMakers on January 31, 2014.

See how Ricki Fairley is related to other HistoryMakers
Click Here To Explore The Archive Today!