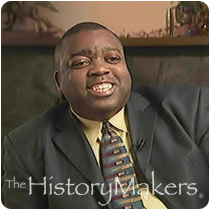 See how Rickey Payton, Sr. is related to other HistoryMakers
Donate Now

Urban Nation Music founder and CEO Rickey Payton was born June 16, 1959 in Washington, D.C., the son of Dazelle Inez Mourning Payton and William Lee Payton, Sr. He started taking piano lessons in kindergarten at Parkview Elementary School. Inspired by Rance Allen, Al Green and Stevie Wonder, Payton played “Walk Him Up” from Purlie, by ear, for his 5th grade assembly at Raymond Elementary School and continued to excel in music through Lincoln Junior High School. In 1972, he composed music for NBC’s The Sunshine Store. While at Cardoza High School, Payton scored the Emmy Award winning documentary New Cotton Club Review before he graduated in 1977. Attending Howard University, Payton majored in music, business administration, and studied entertainment law. Payton was selected to study and perform in Galen, Switzerland in his freshman year. Payton also attended music conservatories in Paris and in Switzerland. At Howard, Payton met the Honorable Walter Fauntroy, who he collaborated with on a musical tribute to Dr. Martin Luther King, Jr.

Payton, as a performer, has toured Europe, Africa, Asia and the Caribbean. He has appeared at the International Jazz Festival in Montreux, Switzerland, and has given command performances at the White House, the Vatican and performed for President Mitterand of France, Queen Elizabeth and the British Royal Family, and Mikhail Gorbachev of the former Soviet Union. Payton composes music for the annual Christmas production of the Washington, D.C. Department of Recreation and Howard’s PBS WHUT Channel 32. In 1994, Payton was co-founder and former board member of City at Peace, a diverse youth theatrical group promoting ethnic understanding. The organization was featured by Ted Koppel on ABC’s Nightline in 1995. Payton’s song, “Let’s Build a Bridge All Across America” was featured at President Clinton’s second inauguration in 1996. In 1997, Payton co-founded Urban Nation, Inc. with Sheila Crump and serves as its president and CEO. He is also the artistic director of the Urban Nation H.I.P. – H.O.P. (Hope, Integrity, Power – Helping Our People) Choir. In 1998 Payton was featured in the documentary film, City at Peace directed by Susan Koch and with Barbara Streisand as executive producer.

Payton serves as minister of music for New Bethel Church of God in Christ and for over 15 years he has taught choral at Sidwell Friends School. In 2000, Payton received the Distinguished Service Award from Dr. Dorothy Height and the National Council of Negro Women. He produced and coordinated the 2002 Get Out the Vote Rally at the Lincoln Theatre and was artistic director and conductor for Coca-Cola’s This is Our World at the Library of Congress. A 2004 Linowes Leadership Award recipient, Payton is an official voting member of the Grammy Awards.

See how Rickey Payton, Sr. is related to other HistoryMakers
Donate Now
Click Here To Explore The Archive Today!