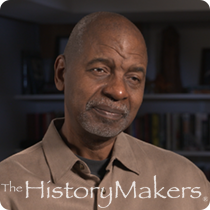 See how Richard Wesley is related to other HistoryMakers

Playwright and screenwriter Richard Wesley was born on July 11, 1945 in Newark, New Jersey to George Wesley and Gertrude Wesley. He graduated from East Side High School in 1963 and went on to attend Howard University. He earned his B.F.A. degree in playwriting, dramatic literature, and theatre arts in 1967.

After graduation, Wesley moved to New York City. His connection to actors Ossie Davis and Ruby Dee, whom he had met at Howard University, led him to the New Lafayette Theatre in Harlem. In 1971, Wesley’s first play, The Black Terror, was presented at the New York Shakespeare Festival’s Public Theatre. The Mighty Gents, another play by Wesley, premiered on Broadway in 1978. In the mid-1970s, began writing screenplays. Many of Wesley’s screenplays enjoyed success at the box office. Wesley produced screenplays for Uptown Saturday Night in 1974, Let’s Do It Again in 1975, Fast Forward, and Native Son in 1986. He also wrote a screenplay for a children’s film that premiered on PBS, called The House of Dies Drear. Wesley also wrote teleplays, which include Murder Without Motive in 1991, Mandela and De Klerk in 1997, and Bojangles in 2000. Wesley was involved with the musical The Dream Team at the Goodspeed Opera House, and The Talented Tenth at the Manhattan Theatre Club. In 2013, Wesley was chosen by the Trilogy Opera Company to write the libretto for the opera, Papa Doc. Two years later, Autumn, which was written by Wesley, premiered at the Crossroads Theater Company in New Brunswick, New Jersey. In 2016, the Trilogy Opera Company’s Five, which contained a libretto written by Wesley and was composed about the Central Park Five controversy, opened at the New Jersey Performing Arts Center.

Wesley has served in teaching roles at multiple academic institutions. He has served as an adjunct professor at the Manhattanville College, Wesleyan University, Borough of Manhattan Community College, and Rutgers University. Wesley has also been an associate professor in playwriting and screenwriting, as well as the chair of the Rita and Burton Goldberg Department of Dramatic Writing, at New York University’s Tisch School of the Arts.

Welsey and his wife, Valerie Wilson Wesley, have two daughters, Nandi and Thembi.

Richard Wesley was interviewed by The HistoryMakers on March 30, 2017.

See how Richard Wesley is related to other HistoryMakers