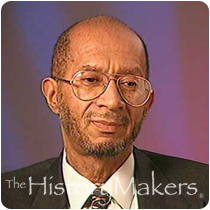 See how Richard Pegue is related to other HistoryMakers
Donate Now

Richard Pegue was born on July 29, 1943, in Chicago to a beautician and a policeman. His father died in the line of duty when he was only two years old. Pegue would go on to develop a strong career in radio.

This career began at age eleven, when Pegue's grandmother gave him a reel-to-reel tape recorder for his birthday. By sixteen, he was using his recorder to D.J. at dances at South Side schools. He even formed a doo-wop group, the Belvederes, at Hirsch High School. After graduating in 1961, Pegue worked bagging groceries at Del Farm Foods and selling records at Met Music. While working both jobs, Pegue still found time to attend radio broadcasting classes at Columbia College.

Pegue continued performing doo-wop with a group called the Norvells. In 1965, Pegue wrote and produced “I’m Not Ready to Settle Down.” Performed by the Cheers, the song still enjoys radio airplay today. In 1968, he became the music director at WVON Radio. When WVON was sold in 1975, Pegue found work at various radio stations in Chicago and Northwest Indiana, including WOPA and WGCI, where he worked as a program director and fill-in disc jockey. In 1987, he returned to WGCI and facilitated a popular format change to urban oldies, or dusties. He stayed with the station for thirteen years. Then in 1993, Pegue began appearing every friday at a Chicago dance club called Taste Entertainment, where he developed a following. In 1996, Pegue attended a movie theater with his wife, Sevina, and suffered a stroke. He spent six months recovering before recovering enough to work. In 2000, Pegue returned to WVON to spin his favorite tunes.

See how Richard Pegue is related to other HistoryMakers
Donate Now
Click Here To Explore The Archive Today!