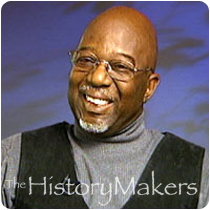 See how Richard Love is related to other HistoryMakers

Newspaper publisher Richard Love was born on June 24, 1938, in Hahira, Georgia to Roosevelt and Ophelia Love. Recruited by the Los Angeles Dodgers following high school, Love declined an invitation to their farm team to pursue a college degree. Love attended Kentucky State University, but left following his freshman year to join the military in 1958. Love spent three years in the service, and spent considerable time at Fort Devers in Boston and Bavaria, Germany, where he became the battalion photographer. Love left the military in 1961 and returned to his home in St. Petersburg, Florida.

Love worked as an orderly at a V.A. hospital for several years upon his return from the military. In 1962, he became security for then United States Vice President Hubert Humphrey. He remained with the V.A. hospital and as security until 1964. The following year, he became a real estate appraiser for World Savings, where he also worked as a housing consultant for the Urban League. Love worked in real estate for nearly a decade, primarily as a housing coordinator of land-based properties in Dade County, Florida. There, he acquired his first experiences in journalism as an editor for the community newsletter. He later moved to Westwood, California, in 1985. There, he continued working in real estate and also became an advisor for black businesses. Encouraged by the success of the African American Denver Times, Love surveyed the community to gauge support for a black newspaper. After receiving largely positive responses, he established The Long Beach Times. Singlehandedly writing, editing and publishing the newspaper, Love focused on giving African Americans a voice by including the names of political representatives and city council members and listing their contact information in each issue. In the early 1990s, he founded the Long Beach Chapter of African American Commerce. A member of the NAACP and advocate of black business development, Love was a devoted leader of the Long Beach community.

Richard Love was interviewed by The HistoryMakers on November 19, 2002.

See how Richard Love is related to other HistoryMakers
Click Here To Explore The Archive Today!