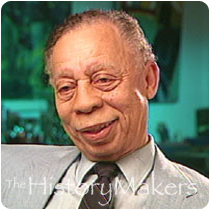 See how Richard Long is related to other HistoryMakers

Renowned scholar of language and the arts, Richard Long, was born on Feb 9, 1927, in Philadelphia, where he spent his childhood. Long attended Temple University, where he received his B.A. in 1947 and his M.A. in 1948. He conducted post-graduate studies at the University of Pennsylvania and abroad, at Oxford, England and Paris, France. From 1957-1958, he studied at the University of Paris on a Fulbright Scholarship. He went on to earn his Ph.D. from the University of Poitiers in 1965.

Long began his career in academia teaching English at West Virginia State College and Morgan State College. While completing his doctoral work, he also acted as a lecturer at the University of Poitiers. Upon returning to the U.S., he taught English and French for Hampton Institute and directed its College Museum. From 1969-1971, he lectured in Afro-American Studies at Harvard University. The following year, he acted as a visiting professor of linguistics for the University of North Carolina. Subsequently, he taught English and Afro-American Studies at Atlanta University from 1968-1987. Since 1973, he has been a professor at Emory University's Graduate Institute of the Liberal Arts. In addition, he has acted as a visiting lecturer to universities in West, Central and South Africa and India.

Long serves on the editorial boards of several publications, including the Langston Hughes Bulletin, Phylon and the Zora Neale Hurston Bulletin. He served as president for the College Language Association and the Southeastern Conference on Linguistics. He currently serves as Commissioner for the Smithsonian Museum's National Museum of African Art and sits on the boards of the High Museum of Art and the Society of Dance History Scholars. He founded the Triennial Symposium on African Art, Atlanta University's Annual Conference at the Center for African and African American Studies and the New World Festivals of the African Diaspora. He was a U.S. Committee Member at the Second World Black and African Festival of Arts and Culture in Lagos, Nigeria from 1971-1977 and has acted as a consultant for both the National Endowment for the Arts and the National Endowment for the Humanities.

Long's published works include Black Americana (1985) Black Writers and the American Civil War (1989) The Black Tradition in American Dance (1989) and African Americans: A Portrait (1993). His work has also been included in over twenty anthologies and encyclopedias of African American culture.

See how Richard Long is related to other HistoryMakers
Click Here To Explore The Archive Today!