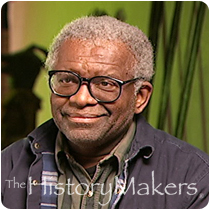 See how Richard Hunt is related to other HistoryMakers
Donate Now

Sculptor Richard Hunt was born September 12, 1935, on Chicago's historic South Side. From his mother, Hunt developed an appreciation of the arts, while he developed a business acumen and interest in politics working at his father's barbershop. At an early age, Hunt gravitated towards drawing, painting and the medium through which he was to transform his own life and the art world -- sculpture. Hunt continued his artistic development at the Junior School of The Art Institute. Hunt attended the University of Illinois, Chicago, and later received a B.A.E. in 1957 from The School of the Art Institute of Chicago.

Inspired by the modern sculptures of 20th century artists, Richard Hunt began to experiment with new techniques, including welding pieces of metal into abstract shapes. Hunt's impact on the art world was immediate. Hunt exhibited at the 1962 Seattle World's Fair, the youngest artist to do so, and sold a piece to the Museum of Modern Art that was chosen for the American Show.
Hunt continued to experimented with a wide-range of sculptural techniques. With his rich body of work, Hunt has explored many historical and contemporary themes and his creations reveal the artist's profound insight into social and political issues. Hunt's ability to transform and fuse raw material with space has earned him the acclaim and respect of many.

Hunt has completed more public sculptures than any other artist in the United States. His signature pieces include Jacob's Ladder at the Carter G. Woodson Library in Chicago, and Flintlock Fantasy in Detroit, Michigan. Hunt served on the governing board of the National Endowment for the Arts and he also served on boards of the Smithsonian. Hunt is the recipient of numerous awards and honorary degrees.

See how Richard Hunt is related to other HistoryMakers
Donate Now
Click Here To Explore The Archive Today!