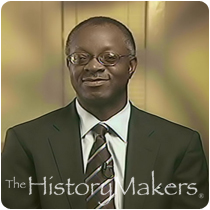 Favorite Color:
Black
Favorite Time of Year:
Summer
Favorite Vacation Spot:
Hawaii
Favorite Quote:
Face Reality As It Is,Not As It Was, Or As You Wish It Were.

Favorite Color:
Black
Favorite Time of Year:
Summer
Favorite Vacation Spot:
Hawaii
Favorite Quote:
Face Reality As It Is,Not As It Was, Or As You Wish It Were.

See how Richard Holmes is related to other HistoryMakers

Richard Lewis Holmes, Georgia Power’s senior vice president of Corporate Services and Employee and Corporate Relations, was born in Columbus, Georgia on October 17, 1951 to Janice George Holmes and Carl J. Holmes. He attended integrated public schools in several southern cities including Clarksville, Tennessee and Fort Campbell, Kentucky, and attended high school in Columbus, Georgia. From there, he enrolled at Columbus State University, graduating with his B.A. degree in business administration. He also earned his M.B.A. from Atlanta University and a certificate from the Program for Management Development at Harvard University.

While still attending college in 1972, Holmes began working summers at Georgia Power. After graduating in 1974, he was hired in the accounting department and worked over the next twenty-eight years in several capacities for Georgia Power; customer service, regional management, corporate relations manager, assistant to the CEO, vice president of Region Operations, and as vice president of corporate services. Georgia Power is the largest subsidiary of Southern Company, one of the nation's largest generators of electricity. Holmes also served as assistant to the late Atlanta Mayor Maynard Jackson.

Holmes serves as a board member of the Georgia Department of Community Health, the Kennesaw State University Foundation and Literacy Action. He also belongs to many organizations including One Hundred Black Men of Atlanta, Harvard Club of Atlanta, and the National Eagle Leadership Institute. In 1999, the Atlanta Business Chronicle named Holmes as one of the Most Influential Atlantans.

Holmes married, Linda McCrary, and they have two sons, Stephen and Mark.

See how Richard Holmes is related to other HistoryMakers
Click Here To Explore The Archive Today!