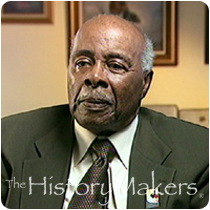 See how Richard E. Stephenson, Jr. is related to other HistoryMakers

Richard Earl Stephenson was born in Nashville, Tennessee on June 4, 1929. Following the divorce of his parents, his mother, Odessa returned to school. While there, she met the man who became Stephenson's stepfather, and both of them stressed the importance of education. When World War II broke out, Stephenson's stepfather George was drafted into the Army and Stephenson became the man of the house, working hard and continuing his schooling. A skilled pianist, Stephenson earned a piano fellowship to Fisk University and he also played in a jazz ensemble. Transferring to Tennessee A & I State College, Stephenson earned a B.S. in chemistry in 1950. He later returned to school to earn an M.A. from the University of Chicago in 1967 and an Ed.D. in administration and supervision from Nova University in Florida in 1976.

After earning his B.S., Stephenson joined the Army, where he served from 1951 to 1954 as an artillery and guided missile officer. Following his discharge, he relocated to Chicago, where he first worked as a research associate at the University of Illinois Medical School before going into education in 1959 as a teacher. From there, he began his ascent through the administrative levels, serving as first an assistant principal at Forrestville Elementary in 1962 and retiring in 1993 as the Interim General Superintendent of Chicago Public Schools. During his years of involvement with the Chicago public schools, Stephenson also served as vice-president of the Illinois High School Association and vice-president of the Chicago Area Boy Scouts.

Today Stephenson is still active with Chicago public schools, lending his support as chairman of the selection committee that chooses outstanding principals and administrators. He has also been involved with charter schools that oversee "at risk" youth. In 2002, he was honored by the National Association for Equal Opportunity in Higher Education as an outstanding alumnus of Tennessee State University. Stephenson is married to retired teacher Ruby Jordan Stephenson. They have four children.

See how Richard E. Stephenson, Jr. is related to other HistoryMakers
Click Here To Explore The Archive Today!