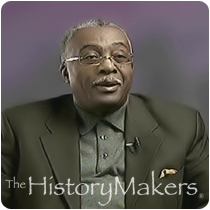 See how Richard Claude Steele is related to other HistoryMakers

From 1960 to 1964, Steele served in the United States Air Force in Orlando, Florida. Attending the New York School of Announcing and Speech in 1964, Steele worked in a part time job at WHIB-AM in 1967. A year later, he took his first full time job in radio as the program director and an on air personality at WTOY-AM in Roanoke, Virginia. In 1970, Steele joined WAAF-AM and WLID-AM in Boston in 1970 and then moved to WGRT-FM in Chicago. A program director at WJPC-FM in 1974, he was an on air personality for WVON-AM and WBMX-FM and hosted WBEZ-FM’s Page Two talk show in the 1980s. For five years, Steele hosted Morning Connection for WVAZ-FM before getting jobs at WBEZ-FM and WGCI-FM in 1994. Steele has also hosted Spirit Express on WGCI-AM gospel radio. At WCIU-TV Steele was seen on Chicago Today, The Discovery Showcase and Urban Street with Ty Wansley. He also worked on the TV specials Bridging the Gap and Two for the Show.

At Chicago public radio station WBEZ-FM Steele hosted Talk of the City, interviewing people like Gwendolyn Brooks, William Safire and Wynton Marsalis. A host and contributor to WBEZ’s talk shows and jazz programs, Steele is a past president of NATRA, the black radio announcers guild, and serves as a local board member of AFTRA. He also makes frequent appearances on WTTW-TV (PBS) as a reporter for Artbeat Chicago. Steele is known to support the efforts of the ETA Creative Arts Foundation and other African American community organizations. He lives with his wife on Chicago’s south side.

See how Richard Claude Steele is related to other HistoryMakers
Click Here To Explore The Archive Today!