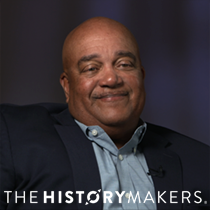 See how Richard C. Walker, III is related to other HistoryMakers
Donate Now

Bank executive Richard C. Walker III was born on October 4, 1949 in Boston, Massachusetts to Helen Hammond Walker and Richard C. Walker, Jr. Walker graduated from Dover High School in Dover, Delaware in 1967, and received his B.A. degree in sociology from Villanova University in 1971. He also completed the Greater Boston executive program at the Massachusetts Institute of Technology (MIT) Sloan School of Management.

Walker moved to Boston, Massachusetts in 1977 to work for the Greater Roxbury Development Corporation as director of development. He also worked as the director of administration before being selected as the corporation’s executive director. Walker oversaw the corporation’s reorganization from a federally funded entity to a privately funded entity. In 1983, he left the Greater Roxbury Development Corporation to join the Lincoln Filene Center for Citizenship and Public Affairs at Tufts University. Working as the associate director, he coordinated conferences, special projects and training seminars. Walker then served as a regional director for the Massachusetts Housing Partnership from 1988 to 1989 before moving to the Federal Reserve Bank of Boston as the associate director of community affairs. In 1999, Walker was appointed vice president and community affairs officer for the Boston Federal Reserve. In 2011, he was promoted to senior vice president and special advisor to the president on community affairs and community development. During his time at the Federal Reserve Bank of Boston, Walker contributed to the development of the Boston Business Collaborative, a project designed to link major corporations with existing minority businesses; and the Working Cities Challenge, an initiative supporting collaborative leadership in smaller, postindustrial cities. Walker stepped down as senior vice president of the Federal Reserve Bank of Boston in 2016.

Walker has served on numerous non-profit boards, including the Citizens’ Housing and Planning Association, the Boston Children’s Museum, and Boston Harbor Now. In 2000, Governor Paul Cellucci appointed Walker to the board of directors of the Massachusetts Bay Transportation Authority. Walker served as a trustee of Bunker Hill Community College from 2010 to 2018. He has been recognized by the International Television Association for co-producing an educational video on women owned businesses and by the American Jewish Committee for his community outreach work. In 2018, Walker was awarded an advanced leadership fellowship with Harvard University.

Richard C. Walker III was interviewed by The HistoryMakers on August 21, 2018.

See how Richard C. Walker, III is related to other HistoryMakers
Donate Now