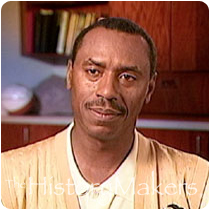 See how Ricardo Patton is related to other HistoryMakers

College basketball coach Ricardo Maurice Patton was born on October 23, 1958 in Nashville, Tennessee to Juanita Patton and Leroy Reed. After his 1976 graduation from Nashville's Hume Fogg High School, where he lettered in basketball, Patton attended Belmont College in his hometown and studied physical education. He earned two athletic letters and was named a small college All-American during his senior year, paving the way for his induction into Belmont's Sports Hall of Fame. Patton earned his bachelor's degree in 1980 and went to work as a studio cameraman at Nashville's CBS affiliate, WTVF-TV. In 1985, his passion for sports began to blossom into a career when he accepted a coaching position at Two Rivers Middle School and Hillwood High School, both in Nashville.

Moving into the arena of college basketball, Patton served as assistant coach for Middle Tennessee State University in Murfreesboro, Tennessee for two seasons between 1988 and 1990. He obtained an M.A. in Administration and Supervision from Trevecca Nazarene College in 1989. In 1990, Patton accepted a post as assistant coach at Arkansas-Little Rock University, but returned to Tennessee in 1991 to assist head coach Frankie Allen at Tennessee State University. Patton achieved the title of head coach at the University of Colorado in 1996. In his first season, he led the Golden Buffaloes to win 22 games - their most wins ever - resulting in their first NCAA Tournament since 1969. The team has continued to play extremely well under his direction, and the recognition Patton earned gained him the title of head coach for the 2000 Big 12 All-Star Team during a tour of Austria. However, Patton prizes good character and determination above basketball skills. To encourage these qualities, he requires his team to take an etiquette class prior to each season.

Patton golfs avidly and holds a fifth-degree black belt in Tae Kwan Do. He is a member of the National Association of Basketball Coaches. Patton and wife Jennifer have two sons, Ricardo, Jr. and Michael.

See how Ricardo Patton is related to other HistoryMakers
Click Here To Explore The Archive Today!