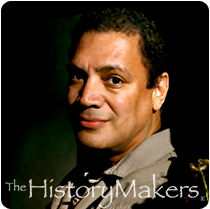 Ricardo Mohamed Khan was born on November 4, 1951, in Washington, D.C., to Mustapha and Jacqueline Khan, a doctor from Trinidad and an American nurse. Khan was raised in Camden, New Jersey. In 1968, as a high school student, he went on a class trip to Broadway and saw an all-black cast perform Hello, Dolly. The trip inspired him to become active in his high school’s drama program, and the next year, he attended Rutgers University, where he studied psychology and theater. Khan earned his B.A. degree in 1973 and his M.F.A. degree in 1977, both from Rutgers University.

Khan and one of his graduate school classmates, L. Kenneth Richardson, were frustrated by the limited opportunities for African Americans in theater; they wanted roles that went beyond conventional stereotypes. In 1978, they came up with the idea for the Crossroads Theatre Company as a place to promote black theater and black artists. With help from Eric Krebs of the nearby George Street Playhouse and a government grant, the company became a reality; its first theater was the second floor of an old factory in New Brunswick, New Jersey. The Crossroads Theatre Company presented their first world premier, One Monkey Don’t Stop No Show by Don Evans in 1981. In 1986, with the premiere of The Colored Museum, Crossroads was established as a distinguished regional company. The next year, Khan and Richardson launched a $1 million campaign to build a new playhouse, though Richardson left the group before the new stage was completed in 1991.

In the following years, the Crossroads Theatre Company became increasingly well-regarded; in a famous 1996 speech, playwright August Wilson described it as a role model for black theaters. Khan won a number of personal awards as well, including induction into the Rutgers University Hall of Distinguished Alumni; an honorary doctorate from his alma mater; and the New Jersey Governor’s Award. In 1999, the Crossroads Theatre Company received the Tony Award for the Best Regional Theater.

However, lingering financial problems forced the company to make major cutbacks. In 2000, Khan went on sabbatical, traveling in Trinidad and later in Africa. That same year, Crossroads had to close for a season; the next year, it was able to mount a few shows, and it has gradually built back up since. In 2003, Khan returned to his role as artistic director, and in 2008 the Crossroads Theatre Company celebrated its thirtieth anniversary.