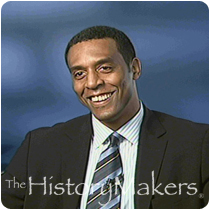 See how Rey Ramsey is related to other HistoryMakers

Lawyer and Chief Executive Officer of One Economy Corporation Rey Ramsey was born Reynard Ramsey on September 10, 1960, in Lower Marion Township, Pennsylvania. At the age of five, Ramsey and his family moved to a predominantly white neighborhood in Atco, New Jersey, where he attended grammar and high school. He went on to enroll at Rutgers University, where he majored in political science and was a member of the Cap and Skull Honor Society. While at Rutgers University, he also became the first African American to head the Rutgers Fraternity/Sorority Council. After graduating with his B.A. degree in political science in 1982, Ramsey went on to receive his J.D. degree from the University of Virginia Law School in 1985.

After graduating from law school, Ramsey moved to Oregon where he worked for the Portland-based law firm of Stoel Rives LLP. In 1986, Ramsey became active in Habitat for Humanity by working on its newsletter, speaking at community events and performing pro bono legal work. Ramsey then decided to make the transition from corporate law to economic law, and worked briefly in various positions managing ports and regional businesses in Oregon. In 1987, Ramsey was appointed by Governor Neil Goldschmidt to serve as the Director of Housing and Community Services in the Oregon State Economic Development Department. In doing this, he became the youngest cabinet member in the history of the State of Oregon.

In 1996, Ramsey went to work for Enterprise Community Partners, a Maryland-based affordable housing nonprofit organization. He served as the organization’s vice president before being promoted to president. While there, he was instrumental in the growth of the organization’s operating budget and human resources departments. Ramsey was appointed to the board of Habitat for Humanity in 1998, and in 2000, he became the co-founder and CEO of One Economy Corporation. This international nonprofit organization works to bring internet resources to the homes of low-income people.

See how Rey Ramsey is related to other HistoryMakers
Click Here To Explore The Archive Today!