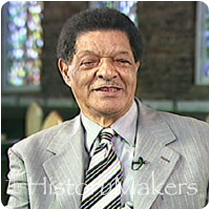 See how Reverend Vernon Dobson is related to other HistoryMakers

Reverend Vernon Nathaniel Dobson was born October 29, 1923, into a committed, philosophical family headed by his father, the Reverend Spencer Dobson. Dobson attended grade school at Baltimore Public School 100 and at Booker T. Washington. He earned a diploma from Frederick Douglass High School and joined the United States Navy in 1940 where he played on intramural sports teams with future baseball Hall of Fame inductee Larry Doby. Qualified for Officers Candidate School, Dobson would not be allowed to participate. He and his squadron were vindicated when their squadron was chosen to march at Truman’s inauguration.

From 1946 to 1949, Dobson attended Howard University where he came under the tutelage of Dr. Mordecai Johnson, Dr. Benjamin Mays, Reverend Howard Thurman, Ralph Bunche, William Leo Hansberry, Thurgood Marshall and others. He received his B.D. in 1949 and went on to Harvard University to pursue graduate studies. He joined the Interdenominational Ministerial Alliance in 1953 and was twice named president.

Following his graduation, Dobson worked as a probation officer and as recreation manager at Knox Presbyterian Church. In 1963, Dobson was installed as pastor of Union Baptist Church in Baltimore where he organized buses for the March On Washington and founded the Food Bank of Maryland. He, with Parren Mitchell, Joseph Howard, Marion Bascomb, Harold Dobson and others founded the “Goon Squad” in 1967 to stop Baltimore’s racially segregated system. With Monsignor Clare and Rev. Wendell Phillips, Dobson founded Baltimoreans United In Leadership Development (BUILD) in 1968, which still serves as a powerful grass roots organization.

Dobson is a central figure to Union Baptist Church’s legacy of social change, which includes Reverend Harvey Johnson and the founding of the NAACP. In 2002, Union Baptist Church celebrated its 150th anniversary with presentations by Reverend Gardner Taylor, Dr. Richard McKinney, Dr. Cheryl Sanders, Freeman Hrabowski and others.

See how Reverend Vernon Dobson is related to other HistoryMakers
Click Here To Explore The Archive Today!