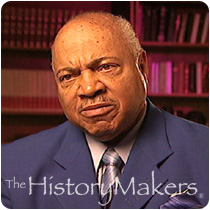 See how Reverend Theophilus Caviness is related to other HistoryMakers

Renowned pastor and civic leader the Reverend Emmitt Theophilus Caviness was born on May 23, 1928 in Marshall Texas. His parents were Lula Page and Will Stone Caviness. Reverend Caviness earned a bachelor's of arts degree from Bishop College in Dallas, Texas. He also holds a bachelor's of divinity from Eden Theological Seminary in Webster Grove, Missouri; an honorary doctorate of divinity from Virginia Seminary and College, and an honorary doctorate in law from Central State University in Ohio.

Caviness has a long history of involvement in the Civil Rights Movement. He currently serves as the president of the Cleveland Branch of the Southern Christian Leadership Conference and is a former member of the Board of Directors for the National Association for the Advancement of Colored People (NAACP), the Congress of Racial Equality (CORE), and the Ohio Civil Rights Commission.

See how Reverend Theophilus Caviness is related to other HistoryMakers
Click Here To Explore The Archive Today!