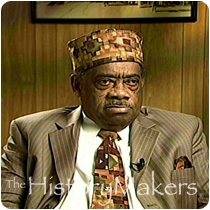 See how Reverend Raleigh Trammell is related to other HistoryMakers

Southern Christian Leadership Conference (SCLC) national board chairman, Reverend Raleigh Trammell was born on December 30, 1936, in Grantville, Georgia. His father, Walter Trammell, worked in a cotton mill and his mother, Thomasina Smith Trammell, was a homemaker who ardently preached to him the benefits of education. Trammell attended segregated Grantville School all twelve years, graduating in 1955. He went on to attend Clarke University, then known as Clarke College, where he was influenced by Reverend Dr. William Holmes Borders of Wheat Street Baptist Church and Dr. C. Eric Lincoln, founder of the Black Academy of Arts and Sciences. When he graduated in 1959, Trammell was an ordained minister and was well-seasoned in civil rights doctrine.

Trammell met Dr. Martin Luther King, Jr., and joined the SCLC in 1960. In 1963, he participated in the Civil Rights Movement in Birmingham, Alabama, Albany, Georgia and the March on Washington. Trammell also participated in the march from Selma to Montgomery in 1965, promoting voting rights for African Americans. After the assassination of Dr. King in 1968, Trammell played a major role in the Poor People’s Campaign. He later moved to Dayton, Ohio, joining his parents and siblings as residents and was hired as pastor of Central Missionary Baptist Church. In 1966, he started working for the Montgomery County Welfare Department as deputy director. Then in 1983, Trammell was elected president of the Dayton chapter of the SCLC. Working closely with Andrew Young, Trammell rose to vice chair of the SCLC in 1996 and chairman of the national board in 2004.

Trammell was the first non-union recipient of the AFL-CIO Community Award in 1991. He received the Outstanding Service Award from the NAACP in 1995, the 1996 IBPOE of W Award in 1996 and was inducted into Selma, Alabama’s Civil Rights Hall of Fame in 1998. In 2005, Trammell garnered the Humanitarian Award from the State of Alabama, and in 2006, he received the Doug Couttee Award. Trammell lives in Dayton, Ohio where he has organized an annual march of 10,000 people to commemorate the ideals of Dr. Martin Luther King, Jr. It is the country’s largest march. Trammell and his wife, Ann, have two daughters, Angela and Cheryl.

See how Reverend Raleigh Trammell is related to other HistoryMakers
Click Here To Explore The Archive Today!