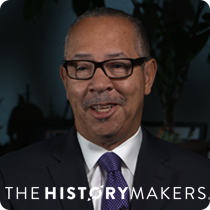 Religious Leader Reverend Nicholas Hood III was born on October 25, 1951 in New Orleans, Louisiana to Reverend Dr. Nicholas Hood Sr. and Dr. Elizabeth F. Hood. He graduated from Cass Technical High School in Detroit, Michigan in 1969 and earned his B.A. degree in economics from Wayne State University in Detroit, Michigan in 1973. In 1976, Hood earned his M.Div. degree from Yale Divinity School in New Haven, Connecticut and was ordained as a minister.

Hood began working under the direction of his father as an assistant associate minister at Plymouth United Church of Christ in Detroit. Hood became senior minister of Plymouth UCC. Hood, a former member of the NAACP board of directors, was elected to serve on the Detroit City Council in 1993. He was re-elected in 1997, but stepped down in 2001 in order to run his mayoral campaign. During his tenure at Plymouth UCC, Hood led mission trips to Liberia and Ethiopia. He also worked to combat homelessness in Detroit, with a homeless shelter program at Plymouth UCC. Hood also worked to provide new computers to inner city youth, and started a scholarship program for aspiring college students. Hood also appeared on local radio programs as a political commentator. In 2015, he published his book The Test, The Strength, The Endurance, and the Way Out.

Over the last three decades, Hood served as president of the Booker T. Washington Business Association, president of the Plymouth Non-Profit Housing Corporation, and President and Chairman of the Plymouth Day School. He is a trustee of the Children’s Hospital of Michigan, on the board of directors of the Detroit Symphony Orchestra, and a trustee of McCormick Theological Seminary. He also served as co-chair of the Young Adult Committee of the Detroit Chapter NAACP, secretary for the Yale Divinity School Board of Alumnal Affairs, and chairman of the Amistad Slave Ship Visit to Detroit in 2002. In 2009, he received an honorary doctorate degree in ministry from Olivet College in Olivet, Michigan.

Hood and his wife, The Honorable Denise Page Hood, have two children, Nathan and Noah.

Reverend Nicholas Hood III was interviewed by TheHistoryMakers on October 19, 2017.