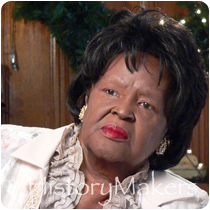 Religious leader Reverend Maxine Walker was born on July 25, 1936 in Pittsburgh, Pennsylvania to Bernadine Lucas, a columnist for The Pittsburgh Courier and the Chicago Defender, and Jack Lucas, a minor league baseball player. After moving to Chicago, Illinois at seven years old, Walker contracted tuberculosis and was unable to walk for a year during her illness. Walker graduated from Cortez Business College before receiving her degree from the Moody Bible Institute.

Shortly thereafter, Walker married Cecil Thomas Walker, a grocery and restaurant owner, and had nine children. Together, they worked in his business, Tom’s Kitchen, while Walker continued to take college courses.

During her career, Walker created the first gospel magazine printed in Chicago, The Platform. After the creation of her own publication, Walker worked for Gatlings’ entities as a public relations person. There, she formed relationships with prominent celebrities like Michael Jordan. Walker then developed another magazine, a television talk show entitled, Touching People, and a gospel play that appeared at the Regal Theatre in Chicago called, One Lord, One Faith, and One Baptism.

In 1980, Walker was called to the ministry and was ordained in 1997. She then became the editor of the gospel newspaper The Spiritual Perspective. In addition to Walker’s passion for teaching the public about spirituality, she is also in the process of writing her first book, Ten Reasons Why You Should Not Use an Herbalist, which educates people about health options when facing debilitating illnesses.

Walker has formed relationships with many notable people throughout her life, including Nelson Mandela and has preached in both Israel and Africa. She counts among her list of influential ministers, Apostle H. Daniel Wilson, Dr. Horace Smith and Bishop Willy Jordan, all of whom share Walker’s passion for teaching the community. In addition, Walker owned a fish market and a lounge on the south side of Chicago and worked as a classified specialist for the Chicago Defender.

Walker was interviewed by The HistoryMakers on April 28, 2007.

See how Reverend Maxine Walker is related to other HistoryMakers
Donate Now
Click Here To Explore The Archive Today!