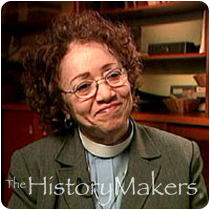 The Reverend Marion J. Roddy-Hart was born in Chicago. The daughter of a nurse and a manufacturer and one of seven children, Roddy-Hart attended DuSable High School, graduating in 1950. Later, she attended Chicago State University, where she earned a bachelor's degree in 1970. After earning some post-graduate credits at the University of Illinois, Roddy-Hart earned a master's degree from Lancaster Seminary in Lancaster, Pennsylvania, in 1995.

Roddy-Hart spent many of her early years working in Chicago. She started her career performing administrative work with the City Colleges of Chicago. From there, she joined the City of Chicago Department of Health, also in an administrative role. After earning her M.A. from Lancaster, Roddy-Hart became a student pastor, where she has served since 1998. Since then, she has also become the pastor of the Albright-Bethune United Methodist Church in State College, Pennsylvania. Roddy-Hart has also been active with the NAACP for more than twenty years. She is married to Morris E. Hart.

See how Reverend Marion Roddy-Hart is related to other HistoryMakers
Donate Now
Click Here To Explore The Archive Today!