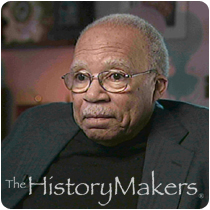 Reverend Marion Curtis Bascom was born on March 14, 1925 in Pensacola, Florida. His mother was a domestic and later a chef. After the death of his father during his early childhood, Bascom was raised by his maternal grandmother. He earned his high school diploma in 1942 from Washington High School where he was active in the chorus, drama club and a member of the tennis team. That same year Bascom was called to the ministry and preached his trial sermon at Mount Olive Baptist Church in Pensacola.

In 1946, Bascom earned his B.S. degree in English from Florida Memorial College. He also served as pastor of Shiloh Baptist and First Baptist Church, both in Pensacola. In 1948, he earned his bachelor’s of divinity degree from Howard University. The following year, Bascom began his 46-year tenure at Douglas Memorial Community Church in Baltimore, Maryland.

While at Douglas, Bascom demonstrated his strong leadership skills in the pulpit as well as the community. In 1962, he created “Camp Farthest Out,” an overnight summer camp for underprivileged children. In 1963, Bascom participated in the Gwen Oak Park Demonstration, a protest that led to the desegregation of Baltimore’s amusement parks. Bascom was appointed Baltimore’s first African American Fire Commissioner in 1968, and under his leadership and direction calm was restored to the city after the disturbances following Martin Luther King’s assassination. In 1970, he received an honorary doctorate of divinity from his alma mater, Florida Memorial College.

Bascom also founded the Association of Black Charities, an umbrella organization of the United Way. Bascom’s commitment to the community included the development of Douglas Village, a 49-unit apartment complex, The Douglas Memorial Federal Credit Union and a “Meals-on-Wheels” program for the sick and elderly.

After his retirement from Douglas Memorial in 1995, Bascom served as the interim Director of Morgan University’s Christian Center. He received numerous awards for his civic and community leadership. He was a member of the Interdenominational Ministerial Alliance, the National Council of Community Churches and the Baltimore Hospitals Commission Board.

See how Reverend Marion Curtis Bascom is related to other HistoryMakers
Donate Now
Click Here To Explore The Archive Today!