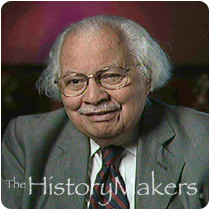 See how Reverend Marcus Garvey Wood is related to other HistoryMakers

Marcus Garvey Wood was born on June 18, 1920, in Gloucester, Virginia. His mother was a domestic and homemaker. His father, a carpenter, was born and raised on a slave plantation. Wood earned his high school diploma in 1937 from Gloucester High School where he was active in the drama and 4-H clubs and a member of the debate team. During his senior year of high school, Wood joined the ministry and preached his first sermon at his home church, Union Zion Baptist, in Ware Neck, Virginia.

After spending a semester at Virginia Union College in Richmond, Virginia in 1937, Wood was invited to train at Enon Baptist Church in Baltimore. In 1946, Wood became pastor of sister churches in West Virginia -- Wainwright Baptist in Charles Town and Zion Baptist in Johnstown. While serving at both churches, he met and married his wife, Bessie, in 1948, and earned his B.A. degree in history from Storer College. In 1949, Wood was called to pastor Bethlehem Baptist Church in Woodbury, New Jersey. The following year, Wood and nine other African American ministers made history when they were admitted to Crozer Theological Seminary in Chester, Pennsylvania. The group of students included Nobel Peace Prize winner Martin Luther King, Jr. Wood earned his master of divinity degree from Crozer Theological Seminary in 1951.

In 1952, Wood began his forty-five year tenure as pastor of Providence Baptist Church in Baltimore. At Providence, he created an adult day care center, an AIDS ministry, and educational programs. In 1998, he published And Grace Will Lead Me Home, a collection of sermons and personal reflections on Dr. Martin Luther King, Jr.

See how Reverend Marcus Garvey Wood is related to other HistoryMakers
Click Here To Explore The Archive Today!