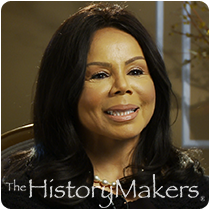 See how Reverend Marcia Dyson is related to other HistoryMakers

Civic activist and public relations expert Marcia L. Dyson was born on October 29, 1951 in Chicago, Illinois. She graduated from Arthur J. Dixon Elementary School and Bowen High School in Chicago, Illinois. Dyson received her B.S. degree in business administration from the University of Illinois in 1983, and went on to complete the University of Chicago Executive Business program.

In 1973, Dyson was hired as a teacher at the Holy Angels School in Chicago, Illinois. She then worked as an external auditor for James Fields CPA. From 1980 to 1982, Dyson served as the first chief of staff for Reverend Jesse Jackson, Jr.’s Operation Push International Trade Bureau. She then briefly served as Black Family Magazine’s community relations director before establishing Marcia L. Dyson Public Relations in 1982. From 1983 to 1985, Dyson worked as an account executive for Aaron Cushman. She was then named senior manager for Margie Korshak Associates in 1985, and then worked as senior vice president of R. J. Dale Advertising and Public Relations from 1987 until 1990.

In 1990, Dyson was hired as the public information officer for the Mayor's Office of Special Events for the City of Chicago, where she hosted foreign dignitaries and served as the liaison to the Illinois Tourism Board, McCormick Authority Convention Center Board, Illinois Film Office and Chicago's religious community. In 1992, Dyson co-founded and served as president and CEO of M and M Dyson, LLC, an international consulting firm. She also founded Women’s Global Initiative, a for-profit organization that works to enhance the lives of women. In addition, Dyson became an ordained minister in 1999.

Dyson served as a presidential scholar at Bennett College in Greensboro, North Carolina; was a social justice think tank executive board member for Philander Smith College in Little Rock, Arkansas; and served as an advisor to Howard University’s international programs. She has also contributed to Essence magazine, New Deal 2.0, The Grio, The Root and Huffington Post online media, and has been a reoccurring political strategist on MSNBC’s Martin Bashir Show.

Dyson was selected to serve on the Women’s Global Summit Leadership board, and co-hosted the Africa’s First Ladies Summit in the Washington, D.C. area. She also helped create a Modern Narrative for Muslim Women. Dyson was named the first Chaplain for the Coalition of Hope, and has been an executive advisor and consultant to the Conference of Black Mayors. She was also a consultant to the Clinton Foundation on behalf of the Interim Haiti Reconstruction Commission (IHRC). Dyson served as a board member of Nap Advanse (We Advance), and has also been a member of many women's organizations, including the Black Women's Round Table, Face to Face, and the Middle East Peace Civic Forum.

Dyson is married to Michael Eric Dyson. They reside in Washington, D.C.

Marcia L. Dyson was interviewed by The HistoryMakers on March 21, 2014.

See how Reverend Marcia Dyson is related to other HistoryMakers
Click Here To Explore The Archive Today!