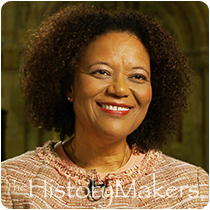 Journalist, corporate executive and minister Reverend Julie Johnson Staples was born and raised in Des Moines, Iowa. In 1978, she received her B.S. degree in journalism from the William Allen White School of Journalism and Public Information at the University of Kansas.

In 1994, Johnson Staples received her J.D. degree from Georgetown University Law Center. Also in the 1990s, she worked as a visiting professor in the School of Communication, Information and Library Studies at Rutgers University. In addition, she was a guest speaker and lecturer at such prestigious institutions as Harvard University's Kennedy School of Government, the Woodrow Wilson School at Princeton University, and the Ford Hall Forum in Boston, Massachusetts.

In 1998, Johnson Staples was named senior managing director and director of the U.S. Media Services practice for Hill and Knowlton. In the early 2000s, she joined the private equity firm of Warburg Pincus as a vice president. She was then promoted to managing director in 2003, and was later named the first African American woman partner at Warburg Pincus.

After almost a decade at Warburg Pincus, Johnson Staples returned to school and received her M.Div. degree in Biblical Studies/Hebrew Bible from the Union Theological Seminary in 2011 and was ordained as a Congregational minister at Plymouth Church in Brooklyn, New York. In 2012, she received her Th.M. degree in Religion, Literature and Culture at Harvard Divinity School and was named interim minister for education at The Riverside Church in New York City.

Johnson Staples is married, lives in Brooklyn, New York, and has one son.

Reverend Julie Johnson Staples was interviewed by The HistoryMakers on July 16, 2014.