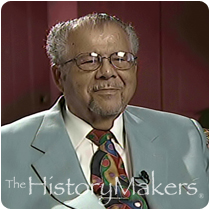 Reverend Joseph H. Evans, D.D., held the distinction of being the first and only African American to hold the positions of both Secretary and President of a mainline church denomination in the United States. Between 1967 and 1983, he was the national secretary of the United Church of Christ (UCC). Upon the sudden death of UCC president, Robert Moss, in 1976, Evans was named the third president of the UCC. He filled this position for one year, 1976 to 1977, and then returned to the secretariat position.

Evans was born on August 15, 1915 in Kalamazoo, Michigan. The son of Etta Hill, a teacher, and Charles A. Evans, a postal worker, Evans grew up in Chicago and graduated from Englewood High School in 1933. During his youth, he was an active member of the Church of the Good Shepherd. In 1939, he received an A.B. degree from Western Michigan University and in 1942, a Masters of Divinity from Yale University’s Divinity School. He was ordained into the UCC that same year.

Following a brief period as the leader of a church mission serving immigrants from Barbados in Brooklyn, New York, Evans served as the pastor of Grace Congregational Church in Harlem, New York from 1942 to 1946. At Grace Congregational, he met Harriette Clark whom he married in 1944. From 1946 to 1947, he served as the Associate General Secretary for the Connecticut Council of Churches, where he ministered to migrant tobacco farm workers and youth. In 1947, he was called to Mount Zion Church in Cleveland, Ohio, to serve as pastor until 1953. Then, he was called to his home church in Chicago to lead the Church of the Good Shepherd. While there, he earned his Doctorate of Divinity from the Chicago Theological Seminary. From 1960 to 1964, he served as president of the Urban League of Chicago. After serving fourteen years as pastor of the Church of the Good Shepherd, Evans was appointed secretary of the UCC. In 1983, Evans retired from the UCC but remained an active pastor for another five years, serving as interim pastor at churches in Columbus, Ohio; Chicago, Illinois; Portland, Maine; Amherst, New Hampshire; and Norwell, Massachusetts.

Evans was interviewed by The HistoryMakers on August 10, 2005.