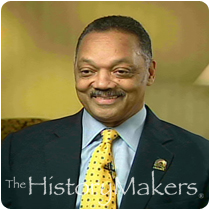 See how Reverend Jesse L. Jackson is related to other HistoryMakers

At North Carolina A&T, Jackson continued to excel in sports. He was an honor student and president of his student body. On December 31, 1962, Jackson married college classmate, Jacqueline Lavinia Brown, in Greenville. Returning to North Carolina A&T, he became involved in the Civil Rights Movement joining the Greensboro chapter of the Council on Racial Equality (CORE). In 1963, Jackson helped to organize several sit-ins, desegregating local restaurants and theaters in Greensboro. Jackson was chosen as field director of CORE's southeastern operations, and president of the North Carolina Intercollegiate Council on Human Rights. In 1964, he also served as a delegate at the Young Democrats National Convention. In the same year, Jackson graduated from North Carolina A&T with a B.S. degree in sociology. He then received a Rockefeller grant to begin his postgraduate studies at the Chicago Theological Seminary in Chicago, Illinois.

Over the next decade, Jackson continued his involvement with local, national, and international politics. In 1983, Jackson negotiated the release of war prisoner, U.S. pilot Robert Goodman, in Syria. In 1984 and 1988, Jackson ran for President of the United States. As a Democratic candidate, he garnered massive support and exceeded expectations for the number of delegates received. Jackson’s electoral run also helped to register two million new voters.

In 1991, Jackson gained international acclaim again when he negotiated for the release of hundreds of foreign nationals in Kuwait under the regime of Saddam Hussein. In that same year, his likeness was put on a United States Post Office pictorial postal cancellation. Jackson is the second living person to ever receive such an honor. President Bill Clinton then appointed Jackson in 1997 as a special envoy for democracy in Kenya, later awarding him the Presidential Medal of Freedom in March 2000. Jackson hosted the CNN television program Both Sides With Jesse Jackson from 1992 to 2000. He has written numerous columns and authored/co-authored several books including Keep Hope Alive (1989) and It’s About The Money (1999).

Jackson and the Rainbow PUSH Coalition have organized numerous events over the years that bring attention to problems facing all Americans including economic advancement, workers rights, labor conditions, voter registration, education, and racial profiling. He has been awarded over forty honorary degrees, received the NAACP Springarn Award, and been listed as one of the top ten most respected Americans. In 2000, Jackson received an honorary Masters degree from his former school, Chicago Theological Seminary. The seminary recognized Jackson’s countless years of civic service to the American community.

See how Reverend Jesse L. Jackson is related to other HistoryMakers