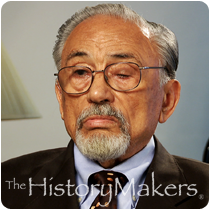 See how Reverend Henry Mitchell is related to other HistoryMakers

Religious leader and religion professor Reverend Henry Mitchell was born in 1919, in Columbus, Ohio to Orlando and Bertha Mitchell. He received his B.A. degree from Lincoln University and went on to attend Union Theological Seminary, from which he received his B.D. and M.Div. degrees. After graduation, Mitchell was hired as pastor of the Second Baptist Church in Fresno, California and later moved to the Cavalry Baptist Church in Santa Monica, California. He also earned his Th.D. degree from Claremont School of Theology and his M.A. in linguistics from California State University.

In 1969, Mitchell became the first Martin Luther King Jr. Professor of Black Church Studies at the consortium of Colgate Rochester Divinity School, Bex Ley Hall, and Crozer Theological Seminary. He also served as professor of religion and Pan African Studies at California State University and academic dean and professor of history and homiletics at Proctor School of Theology at Virginia Union University. In 1988, Mitchell and his wife, the Reverend Doctor Ella Pearson Mitchell, began team-teaching as visiting professors of homiletics at the Interdenominational Theological Center. They became well known for their team-teaching and preaching style, where they would speak to their audience in dialogue with each other.

Mitchell served as the founding director of the Ecumenical Center for Black Church Studies and has written a book on the history of the African American church called Black Church Beginnings: The Long-Hidden Realities of the First Years . In addition, Mitchell has also written Black Preaching: The Recovery of a Powerful Art , a history of African American preaching styles, Fire in The Well , a collections of sermons Mitchell and his wife have given, and Together For Good: Lessons From Fifty-Five Years of Marriage , Mitchell and his wife’s joint autobiography. He has also co-authored the book Preaching for Black Self-Esteem .

Mitchell has been awarded an honorary D.D. degree by the American Baptist Seminary of the West and an honorary L.H.D. degree by Lincoln University. He and his wife are also the recipients of the 2008 Union Theological Seminary Trailblazer Award.

Henry Mitchell was interviewed by The HistoryMakers on July 16, 2010.

See how Reverend Henry Mitchell is related to other HistoryMakers
Click Here To Explore The Archive Today!