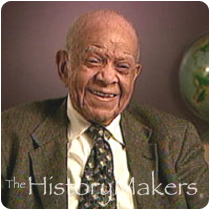 See how Reverend Harry Tartt is related to other HistoryMakers

Tartt taught at 33rd Avenue High School in Gulfport, Mississippi, in 1934 and left Gulfport to pursue a master's degree in English literature at the University of Chicago. Instead, Tartt became a staff writer for Bronzeville’s Chicago Bee newspaper. Drafted into World War II in 1942, Tartt entered the Quartermaster Corps of the U.S. Army with a commission as a second lieutenant. He served as a replacement chaplain in northern Africa and in southern France, and then was stationed in Germany and Italy after the war. During his military career, Tartt earned five battle stars and the Army Commendation Medal, the nation’s highest peacetime award, attaining the rank of major.

Tartt also appeared as an actor in three German movies: The Life of Lola Montez, Alexander the Great and Maid Without Honor. His European stage credits include La Boheme, Pagliacci and Fanny. In Korea, Tartt served as editor-in-chief of seventeen different Army publications. While in the U.S. Army, Tartt attended San Jose State University and eventually earned his M.A. degree in English literature from Xavier University in New Orleans. His experience as a U.S. Army chaplain inspired Tartt to pursue the pastor’s course of study at Emory University’s Candler School of Theology. The United Methodist Church subsequently ordained him. Tartt’s inspirational essays have appeared in many publications.

After his military service, Tartt returned to Gulfport to teach in the school system. He has received numerous awards for service, including the Living Legacy Certificate of Recognition by the National Caucus and Center on Black Aged, the Charlie Green Award, the Harriet Tubman Award, the Ageless Heroes Award and the Citizen of the Year Award. Tartt remained active in the Gulfport area until his death on May 12, 2008. He was 99 years old.

See how Reverend Harry Tartt is related to other HistoryMakers
Click Here To Explore The Archive Today!