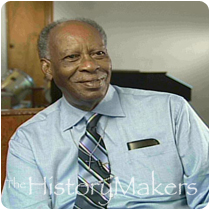 See how Reverend H. K. Matthews is related to other HistoryMakers
Donate Now

Civil rights icon and minister Reverend H.K. Matthews was born Hawthorne Konrad Matthews on February 7, 1928, in Snow Hill, Alabama, to Lavinia Johnson and John Henry Matthews. Matthews was raised by his grandmother, Lucy P. Johnson-Matthews, after his mother died. His grandmother was a school teacher and his father was a farmer. He graduated from Snow Hill Institute in 1947, and attended Alabama Agricultural & Mechanical University for three years before enlisting in the United States military in 1949.

After serving in the Korean War, Matthews them moved to Pensacola, Florida in 1955, where he became involved with church activities and was mentored by one of Pensacola’s leading black clergy, Reverend W.C. Dobbins. During this time, Matthews became active with civil rights activities and was employed by the Florida State Employment Service. He was ordained in the African Methodist Episcopal Zion Church in 1961. While living in Florida, Matthews founded the Pensacola National Association for the Advancement of Colored People Youth Council and the Escambia County Chapter of the Southern Christian Leadership Conference. Matthews spearheaded protests that resulted in the increased employment of African Americans at Pensacola’s Sacred Heart Hospital, Southern Bell Telephone Company and the West Pensacola Bank. Matthews was jailed thirty-five times for his involvement with the Civil Rights Movement. Matthews returned to Alabama in 1977 and continued to minister at Zion Fountain A.M.E Zion church for twenty-four years. During this time, Matthews was also presiding over twenty-one other churches in the area.

H.K. Matthews was interviews by The HistoryMakers on October 16, 2006.

See how Reverend H. K. Matthews is related to other HistoryMakers
Donate Now
Click Here To Explore The Archive Today!