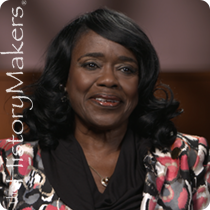 Favorite Color:
Red
Favorite Food:
Fish
Favorite Time of Year:
Christmas
Favorite Vacation Spot:
Florida
Favorite Quote:
Do unto others as you would have them do unto you.

Favorite Color:
Red
Favorite Food:
Fish
Favorite Time of Year:
Christmas
Favorite Vacation Spot:
Florida
Favorite Quote:
Do unto others as you would have them do unto you.

See how Reverend Gwendolyn Cook Webb is related to other HistoryMakers

Civil rights activist Reverend Gwendolyn Cook Webb was born on February 15, 1949 in Birmingham, Alabama. In 1963, Webb was arrested when she marched with hundreds of local students in The Birmingham’s Children’s Crusade, which took place following the 16th Street Baptist Church bombing. She later graduated from Western-Jackson Olin High School in Birmingham, Alabama in 1967, and went on to attend the University of Alabama at Birmingham.

In 1975, Webb joined the Birmingham Police Department as the second African American female hired by the law enforcement agency. The following year, she began working in the business services unit handling fraudulent financial activities. In 1979, Webb was assigned to the Birmingham Jail. She then served as a team investigative officer for James K. Baker, the City Attorney of Birmingham, in 1980. Webb subsequently served as a security staff member for Richard Arrington, the mayor of Birmingham, and became a personal security officer for the mayor and his family. In 1985, the documentary In The Name of Love was released. The film paid homage to the interracial marriage of Webb and her late husband, Lieutenant William Webb, who was a white officer in the Birmingham Police Department. In 2000, she began serving as administrative assistant to Gwendolyn Sykes, a member of the Birmingham City Council. Webb then began working as a code enforcement officer for Birmingham Public Works.

Webb’s participation in the Civil Rights Movement has been widely documented. In 2004, the documentary Mighty Times: The Children’s March, which featured Webb and won an Academy Award for “Best Documentary.” Her participation in the movement has also been documented by the Birmingham Civil Rights Heritage Trial and the Birmingham Black Radio Museum.

Webb has one daughter, Theresa.

Reverend Gwendolyn Cook Webb was interviewed by The HistoryMakers on May 5, 2017.

See how Reverend Gwendolyn Cook Webb is related to other HistoryMakers