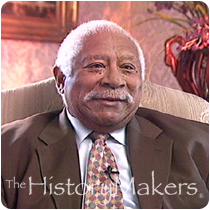 Writer, historian, educator and theologian Gayraud Stephen Wilmore was born on December 20, 1921 in Philadelphia, Pennsylvania. His mother was a domestic worker and his father, a World War I veteran, was an office clerk. His parents were active in the community where he grew up, and his father founded the first Black American Legion Post in Pennsylvania. He attended Central High School later renamed Benjamin Franklin where he was active in the drama club and wrote for the student newspaper. In 1937 Wilmore, just a junior in high school won a citywide contest for an essay he had written on Benjamin Franklin. He was also a member of the Young Communist League; he left the organization several years later after he discovered “he would not be allowed to think for himself.” He received his high school diploma in 1938. After high school, his studies at Lincoln University were interrupted when he was drafted into the army.

As a “Buffalo Soldier,” he served with the all black 92nd Infantry division in Italy. In 1943, he received his call to the ministry while dodging bullets in a foxhole during the war. He received his bachelor’s of arts degree in 1947 and his bachelor’s of divinity in 1950 from Lincoln University. He was also installed as the pastor of the Second Presbyterian Church in Westchester, Pennsylvania in 1950, and would serve that congregation for three years. In 1951, Wilmore helped integrate Westchester elementary schools; his son was the first black student to attend an all white school. In 1953, he began his work with students as an associate executive with the United Presbyterian Church’s Department of Social Education and Action, a position he held for five years. From 1959 to 1963, Wilmore was an assistant professor of social ethics at Pittsburgh Theological Seminary. From there, he served as the executive director of the United Presbyterian Commission on Religion and Race until 1972. In that position, he helped to organize and train ministers who participated in boycotts and protests in the South during the Civil Rights movement. From 1972-1974, he taught Social Ethics at Boston University School of Theology, and then taught Black church studies at Colgate Rochester Divinity School until 1983. Wilmore served as the dean of the divinity program at New York Theological Seminary until 1987 before becoming a teacher of church history at the Interdenominational Theological Center in Atlanta. In 1990, he became the editor of The Journal of the ITC, and he remained in that post for five years. From 1995-1998, Wilmore was an adjunct professor at the United Theological Seminary in Dayton, Ohio.

Wilmore was interviewed by The HistoryMakers on June 21, 2004.

See how Reverend Gayraud Wilmore is related to other HistoryMakers
Donate Now
Click Here To Explore The Archive Today!