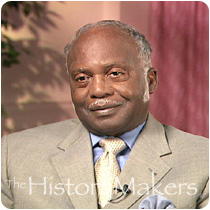 See how Reverend Emmanuel McCall is related to other HistoryMakers

Pastor, scholar, and author Reverend Emmanuel McCall was born on February 4, 1936, in Sharon, Pennsylvania. As a native of Sharon, McCall matriculated at the public schools of West Shenango in Township, Pennsylvania. After graduating high school, he attended Simmons Bible College, University of Louisville, Southern Baptist Theological Seminary, and Emory University. McCall holds four degrees including a doctorate of ministry from Emory University. He also has honorary degrees from Simmons Bible College and United Theological Seminary in Louisiana.

McCall was a faculty member at Southern Baptist Seminary from 1970 until 1996, where he developed the Black Church Studies program that was later used by three SBC seminaries. He also served as visiting professor at theological seminaries in Ghana, Liberia, Nigeria, West Africa, and Emory University. McCall has written four books and has contributed chapters to thirty-one others. He has also written for denominational and theological magazines. McCall has served on the board of trustees for the Interdenominational Theological Center since 1978. He also served on the board of the Atlanta University Center, the board of governors of the Georgia Association of Pastoral Care, the Ethics Commission of the Baptist World Alliance, and the Arrangements Committee for the International Summit of Baptists Against Racism and Ethnic Conflict, just to name a few. He has received many honors and recognitions, such as the E.Y. Mullins Distinguished Denominational Service Award in 1990, which is the highest recognition given by the Southern Baptist Theological Seminary. In 1999, he was inducted in the Morehouse College “M.L. King Board of Preachers,” and he also received the James H. Costen Award from the Interdenominational Theological Center.

McCall is married to Emma Marie McCall. They are the parents of two children and five grandchildren.

See how Reverend Emmanuel McCall is related to other HistoryMakers
Click Here To Explore The Archive Today!