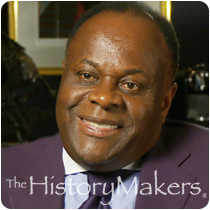 See how Reverend Dr. W. Franklyn Richardson is related to other HistoryMakers

Reverend, W. Franklyn Richardson was born on June 14, 1949 in Philadelphia, Pennsylvania’s Westside. His father William Franklyn Richardson Sr. worked in the meat packing district, and his mother Amanda Richardson owned a beauty parlor. Richardson is the eldest of four and grew up anchored in the church. He attended West Philadelphia High School and obtained his B.A. degree from Virginia Union University in Richmond, Virginia. In 1975, he earned his master of sacred theology from Yale University, and his doctorate as a Wyatt Tee Walker Fellow from the United Theological Seminary in Dayton, Ohio.

At the age of eighteen Richardson delivered his first sermon at Community Baptist Church in Philadelphia, where he was issued a license to preach. By the age of nineteen, Richardson was subsequently, full-time pastor of Rising Mount Zion Baptist Church in Richmond, Virginia and St. James Baptist Church in Varina, Virginia. In 1975, Richardson delivered his trial sermon at Grace Baptist Church in Mount Veron, New York, a year later he was selected to serve at Grace as senior pastor. In 1976, Grace Baptist Church hosted the New Year’s Eve Watch Night service aired on national radio opposite the New Year’s Eve service hosted by the pope. The following year, Grace’s Christmas service aired on CBS (coordinated by actor Ossie Davis). In 1982, Richardson became the host of WVOX, 1460 radio broadcasted nationally every Sunday morning. He is the founder of, “Windows of Grace”, Grace in Port St. Lucie Florida, and the Freedom School. Richardson has been selected by Al Sharpton to serve as chairman of the National Action Network. As chairman, his responsibilities included leading the organization on raising the consciousness of African-Americans.

Richardson has been inducted into the Martin Luther King, Jr., Board of Preachers at Morehouse College in Atlanta, Georgia. He has also been elected as General Secretary for the National Baptist Convention United States of America, Inc. Richardson has served on the World Council of Churches Central Committee, the Ujamaa community development corporation and the Harvard University Divinity School Summer Leadership Institute. He has been presented with the Red Cross Award and in 2010, delivered a sermon at Saint Matthew Anglican Church in Soweto, South Africa. Richardson currently resides in Scarsdale, New York. He is married to Inez Nunnally Richardson; they are the parents of two adult children and the grandparents of four.

See how Reverend Dr. W. Franklyn Richardson is related to other HistoryMakers
Click Here To Explore The Archive Today!