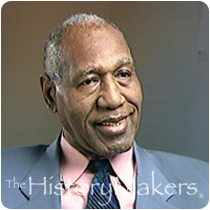 See how Reverend Dr. Stanley Keeble is related to other HistoryMakers
Donate Now

Lifelong lover of gospel music Reverend Stanley Keeble was born March 8, 1937, in Chicago, Illinois. His father, Josephus, was a native of Arkansas and his mother, Idola, was from Mississippi. They moved to Chicago in 1936 in hopes of finding work. Keeble graduated from high school in 1955, and would later return to school, graduating from Daniel Hale Williams University in 1978.

At the age of nine, Keeble took piano lessons, and attended services at the Greater Harvest Baptist Church, where he came under the tutelage of Willie Webb. By 1952, Keeble had begun his musical career. He started out playing the piano, organ and singing, and later directing the choir of Fellowship Baptist Church, under the leadership of Reverend Clay Evans. Keeble continued to perform gospel music, playing with Inez Andrews of the Caravans and serving as the first musician for Jessie Dixon. By 1968, he had formed his own gospel choir, The Voices of Triumph. While continuing to perform, Keeble focused his energies on becoming a minister. He was ordained in 1973. Following graduation from Daniel Hale Williams University, Keeble began teaching English in the Chicago Public Schools in 1980, where he also created an accredited program on gospel music. In 1986, Keeble left teaching to serve as the chaplain at Presbyterian St. Luke Hospital, where he remained for the next thirteen years. In April 2002, Keeble established the Chicago Gospel Music Heritage Museum. He also hosts a weekly radio program entitled The Joy Hour, on WKKC.

For thirty-five years, Keeble has been a member of the Gospel Music Workshop of America. He is also an officer of the Chicago Gospel Announcers Guild. As a gospel pioneer, Keeble is noted for his knowledge of gospel history. He has performed across the United States and in Europe, appeared on radio programs and was a frequent performer on Chicago’s Jubilee Showcase, a weekly program that aired for twenty-one years and celebrated many of gospel’s greats.

See how Reverend Dr. Stanley Keeble is related to other HistoryMakers
Donate Now
Click Here To Explore The Archive Today!