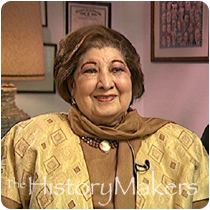 See how Reverend Dr. Ruth Teena Williams is related to other HistoryMakers

Reverend Dr. Ruth “Teena” Williams was born in New Orleans, Louisiana on October 4, 1927. Williams attended public schools in New Orleans, and after graduating from high school, she enrolled in Xavier University, earning her A.B. degree in 1947. She then attended St. Louis University in St. Louis, Missouri, earning her master’s of science in medical social work in 1950.

After earning her master’s degree, Williams moved to Chicago and was hired by Cook County Hospital as a social worker in 1950. In 1955, she was hired by the city of Chicago to work as a social worker with welfare recipients, and in 1957 she went to work for the Veterans Administration. In 1959, Williams joined in the family business, Unity Funeral Parlors, and went back to school to become a licensed funeral director and in 1964 she became an embalmer. Williams served as president and chairman of the board of Unity Funeral Parlors, as well as serving as president of Unity Limousine Services.

Williams was involved with numerous civic organizations, including The Links, Inc., the women’s board of the Field Museum and the Chicago Network. She had numerous awards bestowed upon her over the years, including the Spirit of Love award from the Little City Foundation and special recognition from the Links.

Williams was interviewed by The HistoryMakers on August 26, 2004.

See how Reverend Dr. Ruth Teena Williams is related to other HistoryMakers
Click Here To Explore The Archive Today!