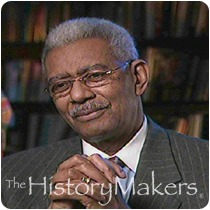 Theologian, pastor, and civic leader the Reverend Dr. Otis Moss, Jr. is one of America’s most influential religious leaders and highly sought-after public speakers. A native of Georgia, Moss was born on February 26, 1935, and was raised in the community of LaGrange. The son of Magnolia Moss and Otis Moss, Sr., and the fourth of their five children, he earned his B.A. degree from Morehouse College in 1956 and his masters of divinity degree from the Morehouse School of Religion/Interdenominational Theological Center in 1959. He also completed special studies at the Inter-Denominational Theological Center from 1960 to 1961 and earned his D.Min. degree from the United Theological Seminary in 1990.

Moss has been involved in advocating civil and human rights and social justice issues for most of his adult life. Having been a staff member of Rev. Dr. Martin Luther King, Jr., he currently serves as a national board member and trustee for the Martin Luther King, Jr. Center for Non-Violent Social Change. His work in the international community has taken him to Hong Kong, Taiwan, and Japan as a member of a clergy mission in 1970, and to Israel in 1978. In 1994, he was the special guest of President Bill Clinton at the peace treaty signing between Israel and Jordan, and, in that same year, he led a special mission to South Africa.

Moss is the recipient of numerous awards and honors, including Human Relations Award from Bethune Cookman College in 1976, The Role Model of the Year Award from the National Institute for Responsible Fatherhood and Family Development in 1992, Leadership Award from the Cleveland chapter of the American Jewish Committee in 1996, and an Honorary Doctor of Divinity from LaGrange College in 2004. In 2004, he participated in the Oxford Round Table in Oxford, England, and was a guest presenter for the Lyman Beecher Lecture series at Yale University.

Moss is married to the former Edwina Hudson Smith. They have three children, Kevin, Daphne (deceased), and Otis, III.