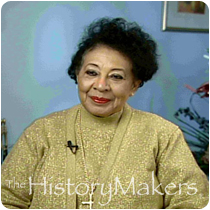 See how Reverend Dr. Mary Ivey is related to other HistoryMakers
Donate Now

Reverend Mary Edith Ivey is an accomplished teacher and principal, government manager, and minister. Ivey was born in Vian, Oklahoma on February 9, 1937, the youngest of five children born to Boyd Henry, a barber and construction worker, and Lucy Henry, a domestic and homemaker. She prepared for a career as a teacher, earning her B.A. degree in 1959 from the College of Oklahoma. She taught for several years in Lawton, Oklahoma and then spent twelve years as an educator in the Kansas City, Missouri Public School System - serving as a teacher, student and family home-school coordinator, head teacher and assistant principal. She attended graduate school at the University of Missouri and earned her M.A. degree in education from the University of Oklahoma.

Ivey prepared for the ministry by obtaining her Master’s of Divinity degree in 2001 from Wesley Theological Seminary in Washington and her Ph.D. in divinity from Howard University. She was ordained into the gospel ministry at the historic Shiloh Baptist Church in Washington, D.C. and at the First Missionary Baptist Church in her home town of Vian, Okalahoma. She served as an Associate Minister at Shiloh Baptist before founding her own church—the non-denominational Church of God’s Love. She is also the founder, President and CEO of Maine Avenue Ministries. Her dissertation for her Howard University divinity degree was published in 2006—entitled Care Giving and Love; Let’s Overcome Violence Everywhere. Ivey’s Maine Avenue Ministries, founded in 1999 in Washington, D.C. is an umbrella for the World of Spiritual Service Leadership Scholarship Awards Program, The Institute for Spirituality, Education and Health and Community Fellowship, the LOVE program (Let’s Overcome Violence Everywhere), and the Long Term Advocacy Program.

Ivey is a widow—her husband, Monteria Ivey, who was an economist, passed away in 2002. She resides in Washington, D.C.

Ivey was interviewed by The HistoryMakers on November 9, 2006.

See how Reverend Dr. Mary Ivey is related to other HistoryMakers
Donate Now
Click Here To Explore The Archive Today!